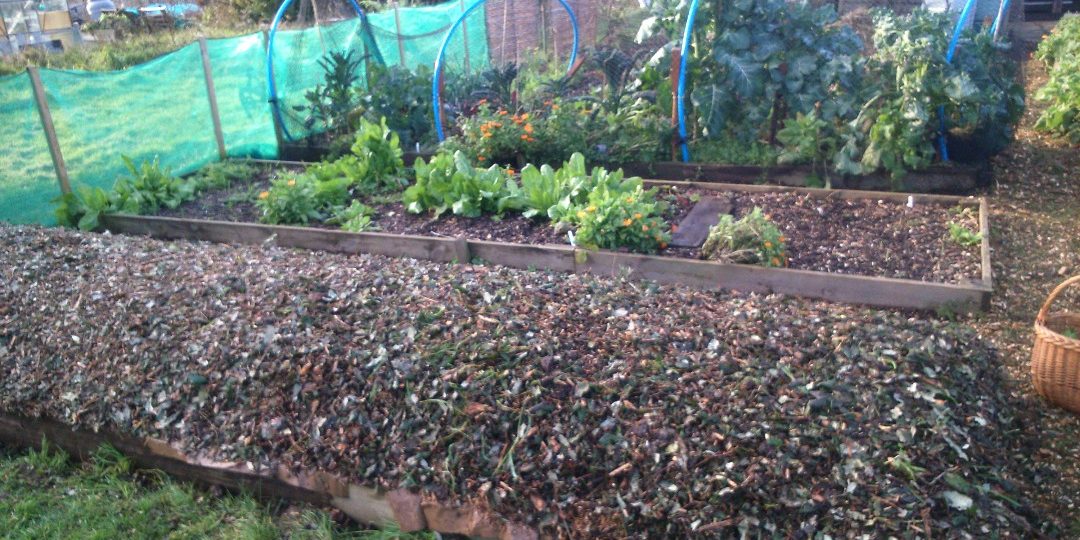 Encouraged by my no-dig experiment last year, I decided to start well ahead of the growing season this time and to be more methodical and thorough.

I was inspired by ‘Gaia’s Garden’ by Toby Hemenway, which explains the benefits of building up soil fertility from the top down, as Nature does, by creating a ‘sheet-mulch’, which is like a lasagne of different raw organic materials spread over the surface of the soil. He gives a recipe for the Rolls Royce of sheet mulches which when finished is 20 – 30cm high.

Any organic matter can be used, but the greater the diversity of ‘ingredients’ the greater the range of beneficial micro-organisms, and the quicker it breaks down. It takes no more effort than building a compost heap and can be done over the autumn or winter when there is more time. It’s very similar to building a compost heap, but unlike a compost heap it requires no turning during the season, or shovelling and barrowing to get the stuff where it’s needed. And the advantage of doing it in situ is that it directly benefits the growing area: whereas in a compost bin, precious concentrated plant juices can leach out from the base and be lost; here all the goodness goes straight into the soil.

That is not to say that having a compost bin is a waste of time. Far from it: during the growing season when the beds are full, you need somewhere to deposit all the useful green waste being generated, and it’s worth spending time and effort adding a mix of ingredients to get good results. The compost can be used when planting new fruit trees or bushes, or spread around the base of perennial fruits or vegetables in the spring, or anything for that matter that is growing in unimproved soil. But it’s hard to create enough home-made compost to benefit a whole plot of vegetables, and this is where the sheet-mulch comes in.

In mild weather last December, I chose another of my four vegetable beds to improve. This approach means that over a four-year period, the soil in each of my beds will become deep and fertile, and in the meantime the unimproved ones will need to be supplemented with whatever I can get my hands on: rotted down shreddings and grass cuttings from the paths, home-made compost, fresh mulches of chopped comfrey and nettles, used potting compost as a seed bed, and occasional bought-in organic manure, but never peat-based compost.

I started off by spreading a thin layer of chopped lush green material over the soil and covered it with a double thickness of cardboard, to suppress the weeds. Having allowed the rain to soak it well, I then spread a 3” layer of unrotted horse manure from a local stables, followed by a layer of coarse fibrous material from my compost heap, then a layer of seaweed gathered from the beach after the recent storms. The horse manure was very dry so I allowed the rain to soak everything before repeating these three layers. After another soaking, I topped it off with a layer of woody and leafy shredded material from the car park heap. This last coarse layer helps discourage weed seeds germinating and keeps moisture and warmth inside so the decomposition process can start.

The bed is 4.5m long by 1.2m wide, and by the time I’d finished it was several inches above the top of the raised bed, and attracted a lot of curiosity. It did look a bit like a shallow grave for a giant.

I knew the mulch would not have rotted down by spring, but wanted to start using it as soon as possible, so decided again that potatoes were a safe bet, and I also tried two rows of peas. By late March some weeds had struggled to the surface, but very few, so it was an easy job to pop the seed potatoes and peas in underneath the top layer. This was the third week of March, and by the first week of April the foliage of both was above ground, and had to be protected with fleece against an overnight frost.

Both grew well and seemed largely unaffected by growing in half-decomposed material, apart from a few rotten potatoes, but that could have been due to the exceptional rainfall over the summer.

But the best proof of the fertility and moisture of the bed was from the difference between the summer squash that I planted at the end of May in this bed and in another bed, which just had some rotted horse manure spread across shortly before planting: by late August the ones in the hastily prepared bed were pale and suffering badly from mildew and slug damage; the one in the mulched bed had healthy dark green leaves and was still producing plentiful fruit.

By the time I cleared the last potatoes in early September, the mulch had broken down to a beautiful fine texture, a joy to work with, and had reduced down to the height of the raised bed. The bindweed had eventually broken through but there again, as we all know, the weeds were rampant this year throughout the allotment due to the crazy weather we had. Nobody claims that no-dig gardening eliminates the need to weed, but when the soil becomes this light and fluffy, you can pull long sections of root out quite easily.

I am now convinced this is the way I want to grow my crops, although next time I may do a scaled-down version of the lasagne bed, and start even earlier – in fact, I need to start now!